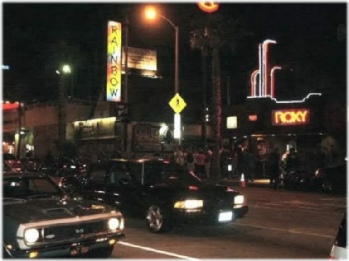 The night they drove Sunset Blvd down

It all started in a small town in CT that was where I heard my first Beatle song Love Me Do I think it was, ok that's a Bad Company song but is actually pretty accurate, it was an early Beatles record that grabbed me, I remember watching the bitten green apple spin on the turn table and listening to magic. I started writing songs and standing on tree trunks and imagining performing for a crowd. I begged my parents for a guitar and got one years later and played it like crazy. I wanted one day to be able to travel the world with my music but living in that small town it seemed impossible, around the time I was 15 I was smoking a lot of cigarettes, and smoking other things, listening to Led Zeppelin and skipping as much school as possible to play guitar, around that time I saw a show on MTV called Decline Of Western Civilization The Metal Years it was about the Hollywood music scene, shows were rare then on MTV they did mostly videos, believe it or not, anyway I wanted to be part of that scene where everyone was going to "make it". I wanted to be part of it, I had to get to Hollywood the lights were on, it was the place to be, and I had to get there as soon as I could, at 18 I arrived it was all it promised, I was rock in rolling all night and partying every day the Sunset Strip was packed everyone was out of control, I thought those days would last forever, little did I know they passed an ordinance to keep West Hollywood quiet, little did any of us know we were catching the tale end . I was there the night they drove the Sunset Strip down hundreds of police arrested everyone in the street, the Sunset Strip became a ghost town within a week, this was 1992 if I'm not mistaken and around this time Seattle took off, many bands lost they're record contracts. if you were from Hollywood you were dropped from your label for the most part, in a town and a time fame and fortune was supposed to be a guaranty, I just put my band together we got the cover of local papers and played all the clubs that no longer had the strength they had even a year before things got bad then things got worse but I always had my guitar to carry me threw and a song to write I could always recapture that feeling of being so young singing Beatle songs on a tree stump in Ct. dreaming away. There was a lot of us musicians and people that just loved music going threw it together. The light slowly came back on in Los Angeles and after a sold out show at The Whiskey I was asked to perform my music for the troops stationed in the middle east. I also got to perform my music in London and Russia life is definitely an adventure. Long airplane rides to places I may never be again there's nothing like meeting new people doing sound check in the afternoon then walking around taking in all the sites and performing for enthusiastic crowds night after night. Then driving or flying threw city's or even war zones!

Threw it all most important is YOU the listener who makes it all worthwhile l look forward to many sometimes hard sometimes scary sometimes exciting musical experiences with you. Here's to hoping you are part of that journey.

If you would like to hear my most recent part of that musical journey click on The Last Song On Radio.